Autodesk® Revit® massing is a powerful tool for generating masses that works at any scale, whether you’re at the conceptual level of a building, at the detailed level refining the fixings and furniture, or working on an entire masterplan. To be able to use this tool to your advantage you should know a couple of techniques. There are two basic workflows for creating masses: create the massing within the project itself (In-Place Massing) or create it in a separate conceptual mass family, which is then loaded into the project. Here’s a brief comparison of these approaches.

In-Place Massing is carried out directly inside the project environment.

On the other hand, a Conceptual Mass Family is built in the ‘conceptual massing environment’, outside of the project environment.

Unless the site has significant changes in levels that would have a real impact on the massing, assume the site is flat and start massing the scheme at ground level. 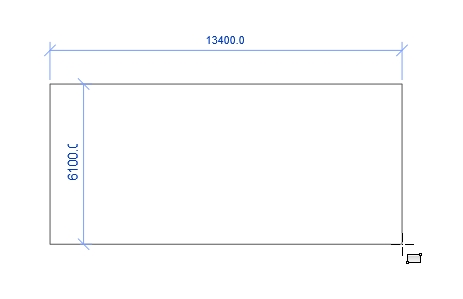 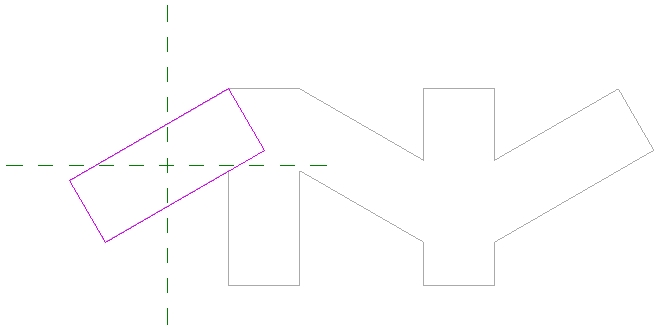 Note: Locking the top of the mass to the level means it will adjust if the floor-to-floor levels change; however, it will adversely affect performance.

Note: When you select a mass (any view), you will automatically see blue arrows on each face. Adjusting the form using the arrows is always perpendicular to the face. 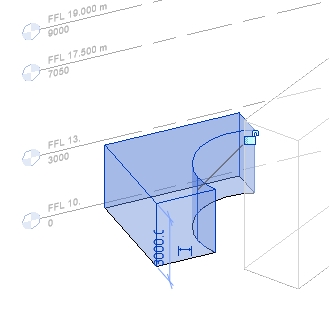 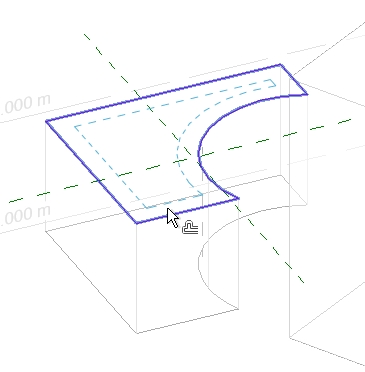 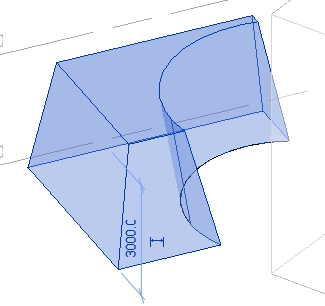 Note: If mass has floors, they will be automatically updated to the new profile.

*Press the spacebar to change the extrusion direction: in line with view axes or perpendicular to surface. 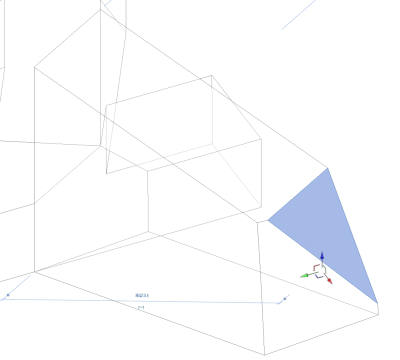 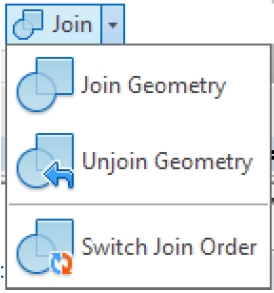 The Join Geometry tool can be used to join one instance of a mass to another. It merges one form into another; if the forms overlap, the second form is adjusted to reflect the correct floor area.


Note: Intersection lines are formed where forms are joined. 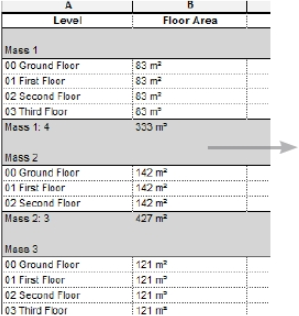 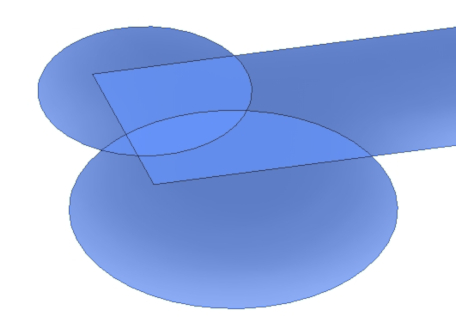 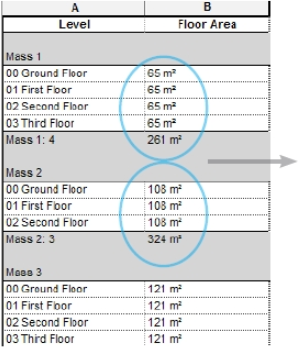 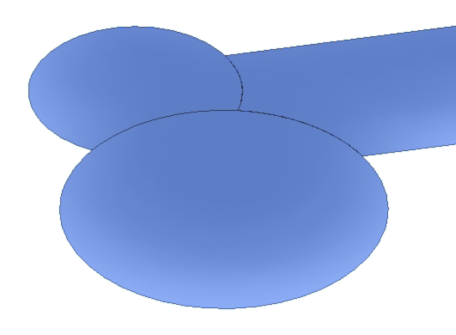 You can create voids in the massing using the Create Void form. For this to work, the void must be created inside the mass that you want to cut. Note that adding several voids may slow down file performance.


Note: When void base is set to ground plane:

Note: When void base is drawn on face and extruded perpendicularly: 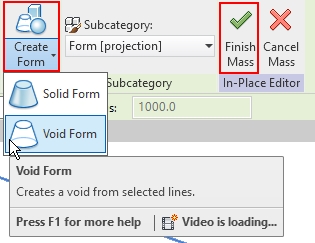 It is not necessary to create a separate mass for each form. If several blocks form part of the same building and share the same floor level, then they should all be created in a single mass. This makes editing easier and when mass floors are applied, they are treated as a single entity. 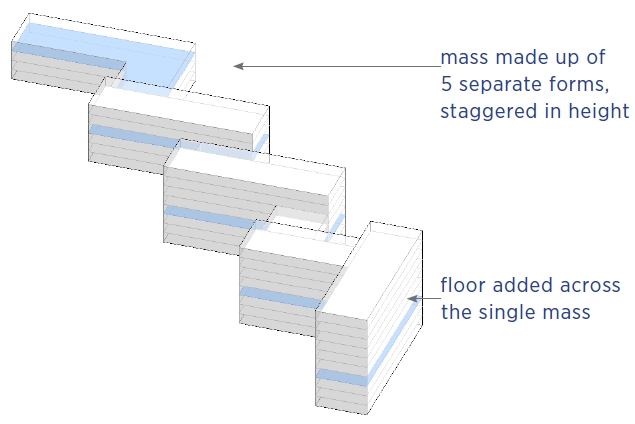 Keep in-place massing in a separate project file, so it can be linked as required. Consider breaking the scheme into separate building models with their own mass floors if the floor levels vary significantly.


In-place massing should only be considered for initial master planning where the masses are pretty much straightforward extrusions and where being able to view the context is useful. If the scheme is more complex or you want to create the form multiple times, consider using the more flexible conceptual mass environment and load the conceptual mass families into the project. 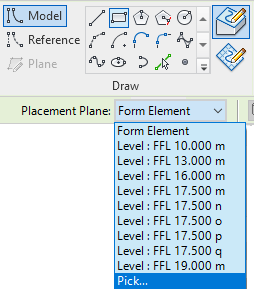 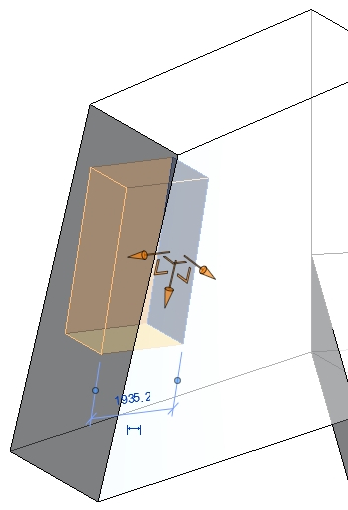 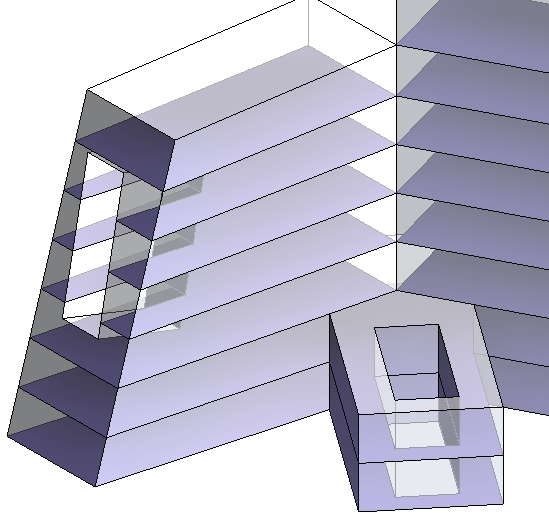 Note: Enter the mass first, then pick a drawing tool. Set to draw on face or set a work plane manually, and pick any face of the mass and draw a shape (profile) from which you can create a mass or a void (can cut into the mass).

Set out the masses using ‘reference planes’ and pin them in place as a guide for the massing. This helps make sure everything is kept orthogonal. 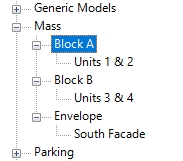 To summarize, these the principal benefits of using in-place mass families are:


Revit in-place massing is an especially useful tool for architects. Producing conceptual massing within the context of the project site and then generating elements like walls, floors, etc. upon those masses is a great way to go.


In Part II of Revit Massing we will look at how to create a Conceptual Mass Family outside the project environment.


Subscribe to our BLOG newsletter and stay updated on upcoming free webinars, Revit tips & tricks, and the latest news on AGACAD TOOLS4BIM development and applications!

Performance cookies are used to understand and analyze the key performance indexes of the website which helps in delivering a better user experience for the visitors.

Analytical cookies are used to understand how visitors interact with the website. These cookies help provide information on metrics the number of visitors, bounce rate, traffic source, etc.

Advertisement cookies are used to provide visitors with relevant ads and marketing campaigns. These cookies track visitors across websites and collect information to provide customized ads.

Other uncategorized cookies are those that are being analyzed and have not been classified into a category as yet.

SAVE & ACCEPT
Powered by